Dan’s Dive Shop was established in 1974 by Dan Mandziuk. The store was originally located at 48 Lakeport Road in Pt. Dalhousie and was a landmark for over 20 years. We are currently located at 329 Welland Ave., in St. Catharines, ON, Canada.

Dan’s was born when Dan decided to share with the world his love of diving. In 1971, Dan began following his dream and became an ACUC Scuba Instructor. Not long after Dan began teaching, he opened up a store front and signed on with a small organization in the mid-1970’s called PADI. Dan had a feeling that they would become a major player in the industry but had no idea that they would become the Worlds Largest International Dive Training Agency. Our store was the 23rd store Internationally to sign on with PADI. Since then we have become a household name synonymous with Excellence in Diver Education receiving numerous prestigious awards for our instruction over the last 35+ years.

Dan has always believed in stocking a large amount of equipment so you can try it on and make a decision by physically touching, feeling and wearing the equipment you’re about to spend you hard earned money on. Looking at pictures doesn’t tell you how a product will fit. Our expert staff, exceptional selection and most competitive prices will ensure you get the best gear for the best value.

Throughout the 80’s and 90’s Dan innovated many new concepts and helped utilize new equipment.

Our name was becoming synonymous with the largest selection and best pricing.  Suppliers were lining up to get in our doors and we had a lucrative mail-order business as well as in store.   in 1986 we began selling Dive Rite a monumental brand of deep, cave, technical diving equipment that was established in 1984.

We were a Top Stocking Dealer and Award Winning Dealer for many of our top brands, a trend that we have gained even higher regards in this modern age.

While Deep Diving was shunned back in those days, Dan was intrigued and a few of our early DDS Divers and Instructors started their journey towards more advanced diving.

Continuing to lead the way 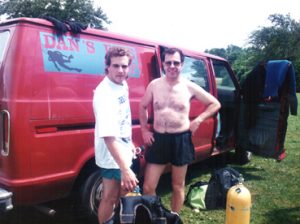 In 1997 Matt Mandziuk (Dan’s son) came into the picture full time in the store after many years growing up in the store, learning about the sport and bringing in new life, new ideas and new techniques to the recreational and technical diving community.

Dan’s commitment to the industry is very dedicated and a full time offering. We have worked hard in this industry. Over 20 dive stores have come and gone in this area. We have grown up into one of North America’s Largest Dive Stores by rating in the Top 20 with many of our suppliers.

Dan’s has lead the way as the trend-setter paving the road scuba diving throughout Ontario, Canada and North America bringing to diving some of the most progressive, modern recreational, technical diving and equipment concepts of diver education available in Recreational Diving, Wreck Diving, Deep Diving, Ice Diving, Technical Diving, Cave Diving and use of semi-closed and fully closed circuit rebreathers.  Regardless of your diving experience we are the right choice in diver education and equipment.

Dan’s goal has always been to maintain our high level of service, our large selection of equipment, our vast knowledge of diving and keep you smiling and actively diving through local trips, weekly dives, charters and trips around the globe.

The evolution of Dan’s

Dan’s was purchased over 5 years ago by Matt Mandziuk who indeed has had a big set of shoes to fill as Dan backs out slowly into semi-retirement and ultimately retirement. We have enjoyed the new concepts Matt continues to bring to the store, as well as fresh and fun ideas.  There are many new and exciting changes with Matt at the helm. While most things have remained the same, the main goals have been to get things running more efficiently and to make the sport more accessible to everyone involved.   One of the most successful changes within the brand was offering in-store financing, renovating the layout of the store, as well as the addition of a number of great new dive trips and charters.  Our goal as a shop is to keep expanding, growing and improving at every turn.

Matt’s vision for the Dan’s brand has also expanded into the creation of Divers Edge – our technical dive training arm. With a solid and proven foundation of recreational diving, the Divers Edge brand aims to further technical diving and exploration with some exciting new projects and trips specific to technical divers.

2019 marked the 45th anniversary of Dan’s Dive Shop. To hit the Forty year mark in any business is a huge achievement – let alone the dive business – is no easy task. We couldn’t have done it without you – our customers and students. It’s been a great ride full of learning, improvement, more learning and lots of bubbles!

Thank you for your continued support of the DDS brand and we look forward to adding more to our history!

See you in the water,